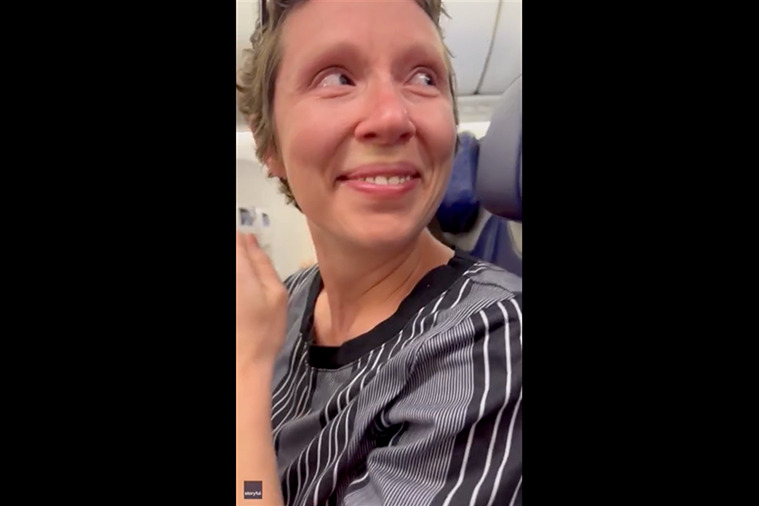 A woman headed to Hawaii to celebrate her victory over late-stage breast cancer was filled with emotion when the captain on her Southwest flight gave her a special shout-out on September 4. Valeri Jones recorded this video and originally posted it to Instagram. Jones told Storyful Jyrl Oldham, who is featured in the video in the striped shirt, was diagnosed with breast cancer in March of 2021 while she was pregnant with a baby girl. “She started treatments ASAP after her daughter was born in August 2021. She finished surgeries and treatments and was deemed cancer-free in August 2022,” Jones said. “After almost passing away during one of her treatments, she thought a vacation was necessary to prove to cancer it hadn’t won and she still had the strength to go on with life!” The surprise announcement was planned by Jones’s husband, Garrison, who wrote an email to the airline ahead of their flight and printed a letter for the flight attendant before boarding the plane, Jones told Storyful.

In the footage, the captain can be heard in his announcement saying, “I would like to add a special welcome to a special guest in today’s flight: We have a passenger who’s headed to Hawaii with us today to celebrate her victory over late-stage breast cancer…” The captain continues, “She fought valiantly and is now cancer-free. Please join me in giving her, Jyrl Oldham, a round of applause.” “Jyrl, who is a former pilot herself, loved the announcement and was elated at the reaction the passengers on the plane gave her. It was a great way to kick off our trip,” Jones said. Credit: Valeri Jones via Storyful